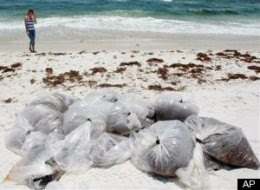 by Garance Burke and Jason Dearen
NEW ORLEANS — The cleanup of history's worst peacetime oil spill is generating thousands of tons of oil-soaked debris that is ending up in local landfills, some of which were already dealing with environmental concerns.
The soft, absorbent boom that has played the biggest role in containing the spill alone would measure more than twice the length of California's coastline, or about 2,000 miles. More than 50,000 tons of boom and oily debris have made their way to landfills or incinerators, federal officials told The Associated Press, representing about 7 percent of the daily volume going to nine area landfills.
Read the rest of the story HERE.  Teresa
Posted by Green Bag Lady Teresa at 8/26/2010