As I have told you before, I'm not a big fan of winding bobbins. And, I go through A LOT of bobbins, especially if I am sewing handles on oodles of bags. I have many of them, but when they are all empty a deep sigh escapes from the corners of my soul. Too dramatic? I have been trying to figure out how I can wind bobbins from the BIG serger spools to help save on the cost of thread. Here is a comparison chart: 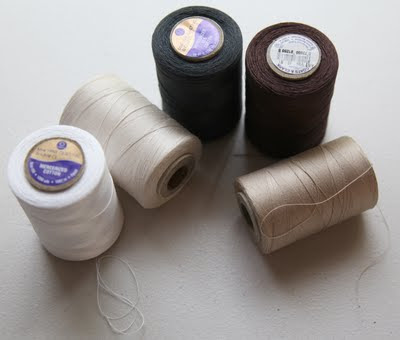 I tried many things to wind bobbins from serger spools:
plan A) holding the serger spool (not a good plan)
plan B) putting it on my other sewing machine that has a vertical spindle (see plan A)
plan C) buy one of those bobbin winders (it broke after 3 bobbins, returned it)

Then, lightening stuck, how about I leave the spool ON THE serger and just move my other machine closer. Kazzzammm! It worked! See…
Can you see the thread stretching from one machine to the other? It was so exciting, I wound many bobbins in no time AND it was much cheaper! Yay!

Before pile:
and after… 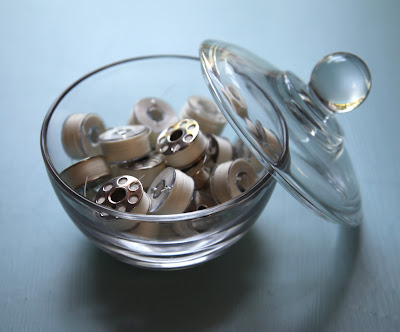 Thanks Sharon, try it!

Great idea - thread adds so much cost - so will give this a go!

Wanna do mine now?

Lynn--Let me know if it works for you too!

You may have to learn to sew Gaia!