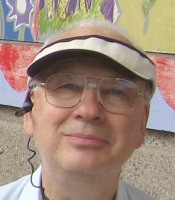 Ever since I can remember, my dad has been green. Certainly LONG before it was cool. Growing up, my father was meticulous about recycling, still is. He only ever buys exactly what he needs, no more. He doesn't like a lot of "stuff" in his life. Especially if it is not useful. I can remember more than one time hearing him say, "It doesn't matter what it cost or how much of a bargain it is if you don't NEED it."

Dad is an engineer and grew up on a farm so I think that is largely what shaped his ideas of what is necessary and what is stuff. He has never been sucked in to buying something because it was new, cool, etc. He doesn't even own a TV. He does love his computer and cell phone though.

When I first sent my dad the Green Bag Lady link for the site, I was amazed at his response. He was living in California at the time and I got a huge email from him telling me how great he thought the project was and he had many questions about the blog. He is still one of my greatest supporters and I love him dearly for it. This could not have grown the way it has without his financial, technical and verbal support.

Thanks for the "green genes" Dad. We both know Mom would have been in the Green Bag Lady cheering section as well.

Thanks for sharing this... how lucky you are to have such a great role model and cheerleader!

It's funny that your dad is that way! I'm that way too! I can't stand "extras" laying around. If I haven't used it in 6 months, I give to someone that can. Less is more!